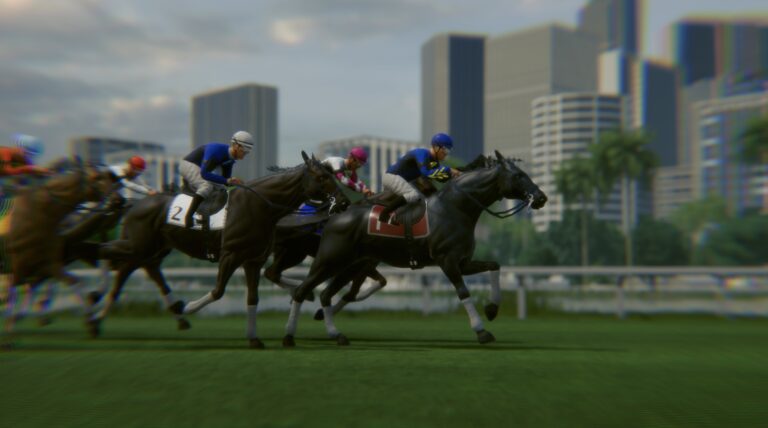 Hello Managers, it’s time for a post from your Lead Designer, Paul. This one is hefty, enough that we’re splitting it into three parts. Please apply your thinking caps. It’s POST TIME! Over the next few days I’d like to talk about Horse Tickets, and we’re going to answer 7 questions:

What are Better Genes?

As the guy making the calls on these deeper level designs, it’s easy to lose sight of what’s complicated. I’m up to my arms in horse genetics every day so the idea of better genes isn’t something I think to explain regularly. But on your end, the phrase could mean anything. To explain, I’m going to use a simplified example that isn’t quite how things work but functions in a similar way (and won’t spoil the system).

When I say “Better Genes” here’s what I mean: Just like real life, every Photo Finish Live horse has a host of genes that make it who it is. For PFL, we take those true to life genes and use them to produce numerical values that can be understood and used by the game system. The number of genes is much larger than anything seen on a ticket; don’t confuse these genes numbers with bonus count.

Genes end up as a series of values that looks like: 1-0-2-4-0-1-0-0. Every combination of numbers results in a different value for a given stat. To simplify things, let’s say we add them all up and each number is a different result. Then we say, “a 7 is an S and an 8 is an S+.” The numbers above add up to 8 so those genes would come out as an S+. One meaning of “Better Genes” is that you get an 8 instead of a 7. Lets call it Better Total.

The complex side is future generations. That 8 we had above could be composed from any of the following combinations (Or many many more):

If that looks confusing, it is! Because your horse passes a random 50% of its genes to a foal, “Better Genes” is not only a question of how high your total is, but also a question of which numbers you have, and —to a lesser extent— what position they’re in.

To pull back the curtain, I’m going to share a very real example. One of the places where “Better Genes” currently means something different than “8 instead of 7,” is the total bonus count on each ticket. Tickets with higher bonus counts are more likely to receive (2-0) than (1-1). Why is this good? Well, a horse with a perfect set of 1s can’t ever pass on anything higher than a 1. The horse with (2-0), however, can pass on either number.

It’ll show more variance, but its foals can reach heights that the (1-1) horse’s never will.  In the example below, each parent passed on 4 of their 8 genes (50%). However, the foal ended up as a much higher grade because the 50% that the mare passed were some of her better genes.

That’s the OTHER meaning of “Better Genes,” let’s call it Better Quality.

Of all the questions this is probably one that some players already have a sense of. Many of you got to play around with the breeding tool before you ever committed to a horse, so you’ve seen plenty of different combinations. Even so, let’s clarify the specifics:

Each match on your ticket got you:

The problem for most players — which is perfectly understandable — is that no one knows what those boosts are worth. As it stands, it’s a black box of information. Ticket goes in, horse comes out, and you only have the promise of “better genes” to hang your hat on.

Now that we’ve talked about what “Better Genes” actually means, things ought to be a little clearer. And hey, if you already knew this, you’re ahead of the game; nice job 😉.

Either way, I’ll see you all in Part 2 where we analyze Beta V.1 Gen 0 and talk about whether or not we met our design goals.