One King, One $CROWN

Let’s rewind for a second… and catch you up on how these ADORABLE illustrations have come to link to a deep virtual horse racing ecosystem.

Firstly, those familiar with the Stylish Studs mint may know it was a sort of… experimental mint, mainly aimed at our existing player base. What that meant was that the project was on almost NOBODY’s radar who wasn’t already aware of our previous projects, and yet we managed to sell out all 10,000 due to word of mouth (plus maybe that 0.2 SOL price tag).

However, a few months later community interest was not only wrapped up in the promise of the project and team, but also in that each Stylish Stud brought about a chance to be parachuted a Fine Filly, the female counterpart to the Studs. Fillies ended up keeping a very healthy floor price throughout their existence and these two assets would then breed to create the genetic FOUNDATION of Photo Finish™ LIVE – they were the Adams and Eves whomst created the Generation Zero tickets.

Eventually the Fine Fillies were ALL converted into the Marvelous Mares (having bred or not), the female PFPs which now comprise a 5,000-piece chunk of the overall 15,008-piece PFP collection.

Certainly there already existed many Stylish Stud holders who minted an asset for 0.2 SOL, which appreciated ~20x-30x within the first few months, received a Fine Filly worth ~10 SOL+ and feasibly decided to breed them to create a ticket (another 5+ SOL at MINIMUM without even factoring in earnings from the game itself).

(Hint: Delivering sustainable assets with rolling utilities may just be the theme here…)

Thus, the community was excited by the prospect of breeding, the charts were healthy – AND YET… and yet… somewhere in the middle of that timeline we announced another CRUCIAL utility wrapped up in the PFL PFP collection…

You probably guessed it – it’s $CROWN baby, the treasure hidden behind these seemingly INNOCUOUS horse jpegs.

SO WHAT IS $CROWN?

$CROWN is the utility token of the PFL ecosystem. It is a 250,000,000 fixed supply token and the counterpart to our general-use currency, $DERBY(working name), in our multi-asset economy.

How do the PFPs tie into $CROWN you ask? Well… Photo Finish™ LIVE PFP holders are allocated 50% of the total supply of $CROWN over a 2 year period based on the amount and overall collection rarity of the PFPs in their wallets.

So, along the theme of UTILITY we continue…

Of course, our previous example has been illustrated mostly in retrospect – whereas the value of $CROWN is currently speculative. What sets $CROWN apart from other horse racing game tokens – what is the distinction? 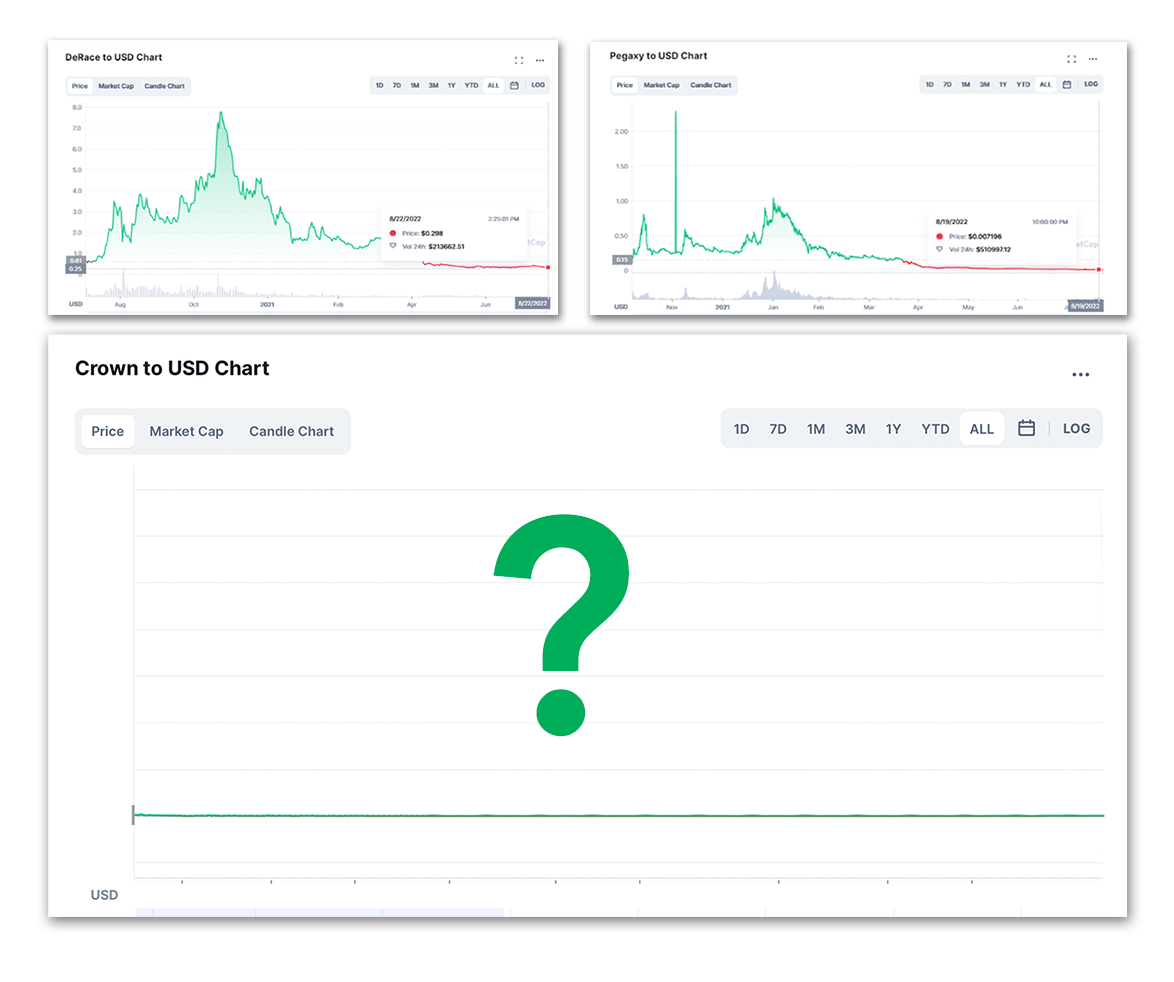 Well, check this out – what if we told you that we think we’ve had one of the major elements we find lacking in almost all P2E games in mind since the outset of our development?!

There is quite a list of things we believe we are doing industry leading work on… but for our purposes here we will focus on how we think $CROWN is a fantastically incentivized utility token in a SUSTAINABLE game economy.

To start, $CROWN will be used as the primary currency of racetrack ownership.

$CROWN that is earned by PFL PFP holders can be invested into in-game tracks, which then yield a portion of the monetary flows of that track. Choosing the right track to invest $CROWN into is really an entire article unto itself – so let’s continue along.

Similar to our Studs > Fillies > Gen Zero pathway above, we have created a system that COMPOUNDS the utility of our assets. You purchase a Photo Finish PFP, you earn $CROWN based on its rarity (scaffolding the collections value across rarities), and then you use that $CROWN to gain ownership of what is essentially the REAL ESTATE of the game world – race tracks.

And let’s talk about incentivization here – becoming part owner of a race track means becoming a major player in the games economy, which is completely aligned with YOUR incentives as a player looking to thrive in the world of Photo Finish ™ LIVE! This is a crucial element to ANY utility token – if the utility is something that aligns with the goals of players AND has thoughtful supply/demand dynamics without GATING players from playing the game or competing with other internal assets then you’re probably onto something.

Yes… the world of Photo Finish™ LIVE, a world in which races are paid in a token of FIXED VALUE – races are worth what they’re worth, systemic transactions are of predictable cost, and players are INCENTIVIZED to play rather than discouraged by an unstable economy.

A world in which horses breed using a TRUE TO LIFE genetics system, age and die! Sorry, we don’t mean to delight in horse death but this is NATURE man! A world in which Secretariat MUST eventually move on to the great pasture in the sky, opening up the field to promising newcomers looking to create their own legacy. And so it goes…

Now, are you seeing how the value of $CROWN is tied to the sustainability of our model?

Owning PFPs and thus $CROWN is essentially understanding that what we are doing here is making FRONTIER moves towards a web 3 gaming experience that has the potential to sustain itself through YEARS of gameplay and ALL of the many player-led transactions that can occur throughout.

Not to mention the potential for $CROWN as a token is vast – keeping in mind the broadminded approach that $CROWN brings about in its utility as a means to share ownership of in-game assets, it follows for instance that there is a lot of potential as a means of multi-owner governance for organizations such as DAOs and in-game syndicates… although that is also a story for another time…

You can expect more details about $CROWN and its introduction into the ecosystem in the coming months… until then we’re confident you’ll be viewing those cute horse jpegs in a different light, awoken to the treasure that lies beyond the façade.

If you’d like to read more speculation about $CROWN, here is a great article by one of our community members.