What is a Fleet Figure?

Starting with Beta V.2, Photo Finish Live is going to rank race horses with something called a Fleet Figure. Fleet Figures are a quick and simple way to understand a horse’s race performance. They’re designed to be easy to compare, so you can see how a horse does against different fields and at different lengths.

How is a Fleet Figure Calculated? 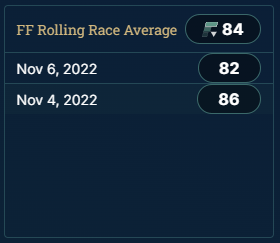 Fleet figures are a simple calculation. Every time a horse runs a race, they receive a rating based on their time, adjusted for the race and track. The system collects these numbers and uses a rolling average of the last three to evaluate a horse. Higher numbers are better, and only top tier horses will cross the 100 point mark.

Why are there Four Numbers?

Every horse that has run at least one race has 4 numbers to rate how well it performs. Three of them are labeled Early, Middle, and Late. Each of these numbers refer to the horse’s performance in that portion of the race. The number on the left, marked with the Fleet Figure symbol, is an average of these values.

How Do I Use Fleet Figures – Basic?

To start off with, a higher Fleet Figure is good. When buying, racing, and wagering on horses, a horse with a higher number has proven that it can hit a better time than its competitors. Note the emphasis on “can.” Just because a horse was incredible in one situation does not mean it’s incredible in all of them. Still, it’s a good place to start.

Checking the Early, Middle, and Late figures is step 2. Unlike the FF which tells you about the horse as a whole, these figures give you some information about what the horse is good at. While it’s a simplification, Horses with better numbers in one category are probably better at races that match. A great early performance will shine in short races, and a great late performance will shine in longer ones.

How Do I Use Fleet Figures – Advanced?

For the next level of strategy, it’s time to check the horse’s previous races. Every Fleet Figure corresponds to a specific race. If you compare the features of that race (distance, surface, direction, condition, etc…) you can learn a lot about what a horse is specifically good at. Try comparing recent sprint (Early) numbers to recent route (Late) numbers. You may find that the Fleet Figure changes by quite a few points. That’s valuable information.

Another thing to look at is how the number changes over time. If it’s wobbly, why does it change so much?  Perhaps someone has a little temper problem 😏. Is it slowly arching up or down? The horse is aging. There’s a lot of advantage to be gained by paying attention to the little things. See what you can do.

Was this article helpful to you? Yes No

How can we help?